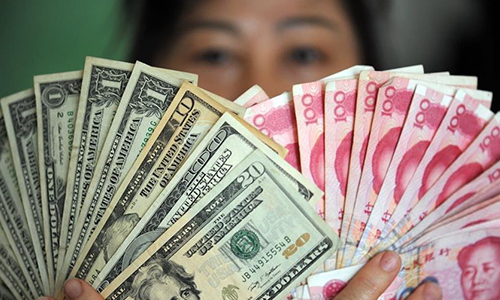 The yuan's central parity rate against the US dollar appreciated to the strongest level in three months on Monday after the recent receding of the China-US trade war. Experts noted the exchange rate would remain stable given promising domestic economic growth and less external uncertainties.

The yuan's central parity rate strengthened 241 basis points to 6.9915 per US dollar on Monday, and it dropped below the 7-yuan-per-dollar mark for the first time since November 12, according to data from the China Foreign Exchange Trade System (CFETS).

It was the fifth trading day in a row that the yuan rose against the dollar, with the currency at the highest level since August 6, according to CFETS.

The fundamentals of China's economic growth are still promising, meaning that the yuan's exchange rate will remain stable and room for depreciation is limited, Zhou Yu, director of the Research Center of International Finance at the Shanghai Academy of Social Sciences, told the Global Times on Monday.

China's trade and foreign investment in the first 11 months have recorded positive growth, and the just-concluded Central Economic Work Conference has set the tone for more fiscal support to prop up China's economy in 2020, in which the top priority is to maintain stable growth, Zhao Xijun, vice director of the School of Finance at Renmin University of China, told the Global Times.

Stable economic growth would lay the foundation for a stable yuan exchange rate next year, he noted.

Experts noted that the recent consensus reached by China and the US have eased tensions in the global market and led to the appreciation of the yuan.

However, the opening-up of China's financial markets, which could herald more financial risks, coupled with the uncertainty hanging over future China-US trade negotiations, could cast shadows on the yuan's exchange rate, experts said.

Zhao noted that the fluctuations of the yuan, which are in tune with market sentiment and expectations, also represent a sign that the Chinese currency is moving against the dollar in a more market-oriented manner.